“Celine Dion has a huge international following…So, it isn’t surprising that a Senegalese man would know of, and admire, her. But, to have this come from an Al-Qaeda captor in the Sahara Desert, some weeks into our captivity, was so bizarre.”

Anyone who can use the words “Celine Dion,” “Al-Qaeda,” and “captivity” to describe a moment in their life must have experienced something extraordinary. Robert Fowler has a tale to tell and it is, indeed, extraordinary. 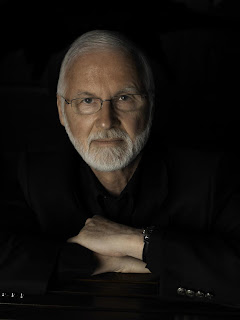 As a senior diplomat for the Canadian government for 38 years, Fowler had experienced his share of thrills. With posts including the Canadian Ambassador to the UN, and the personal representative to Africa for several Prime Ministers, Fowler honed his skills and interest on the continent of Africa. Whether it was trips to war-torn Somalia, Darfur, or the Congo, he was often in danger.

Nothing, however, could have prepared him for the events of December 14th, 2008.On that day, Fowler was wrapping up his work in Niger for the United Nations. He had been sent as part of special envoy to broker peace between a rebel group and the national government. The trip was coming to an end, and after finishing his work for the day he headed back to the capital, Niamey, in his UN vehicle. He never made his destination.Instead, a truck with several armed men pulled over his vehicle and proceeded to forcefully kidnap him, his UN colleague Louis Guay, and their Nigerien driver, Soumana. For 56 hours they were driven across the rugged terrain of the Saharan desert, and brought to a holding camp.

Along the way they learned a horrible truth – their captors were members of Al-Qaeda in the Islamic Maghreb (AQIM).For the next 130 days they were held in captivity in various camps across the desert. The experience was like a roller coaster of the most extreme of emotions. Their lives were threatened, they were forced to make “proof of life” videos, they were proselytized at to no end, and they were falsely promised freedom several times.The entire captivity Fowler and Guay lived in close quarters with the captors – they socialized predominantly with each other, but also interacted frequently with the AQIM members.

In a complicated, and convoluted, series of events the captor’s began to negotiate with the President’s of Niger and Mali, and the government of Canada for their freedom. Finally, on April 21st, 2009 they were set free. Some of the details of why they were released, and for who, still remain a mystery to this day. 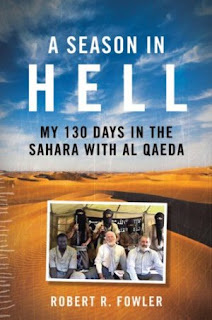 Their survival is a story of unimaginable fortune – many don’t make it out of captivity alive.

Since the ordeal ended, Fowler has worked hard to write a book to tell his side of the story. His time in the desert gave him a priceless opportunity to study one of the world’s most infamous terrorist groups. In October of 2011 he released A Season in Hell: My 130 Days in the Sahara with Al-Qaeda.The book is entirely his perspective of the ordeal. Fellow captor Louis Guay continues to work for the Canadian government and did not partake in its writing.

As well as writing the book, Fowler has continually voiced his concerns on Canada’s foreign policy in Africa, and the Middle East. He is highly critical of Canada’s foreign affairs, and openly speaks on what he thinks could be done to improve Canada’s policies and actions.

In December of 2011 Fowler received the Order of Canada. The award “recognizes significant achievements and remarkable service.”

There is much I WANNA KNOW about Robert Fowler’s ordeal and his life since captivity. I caught up with him over the phone from his home in Ottawa.

From his time with Al-Qaeda, to life after the ordeal, to his return to Africa, to Celine Dion, to his assessment of the region today, we cover it all.

Ryan Kohls: Congratulations on your Order of Canada award. What does this award mean to you? And, were you surprised to receive this based on your outward criticisms of Canada’s foreign policy?
Robert Fowler: Well, I think given what you just said, it demonstrates quite clearly that democracy is alive and well in Canada. The Order of Canada was instituted in 1967 for our centenary, and was one of the later moves towards complete independence in Canada. It’s structured to be a national award that recognizes Canadian achievement. It recognizes people in all walks in life, and any Canadian can nominate any other Canadian for the award, and there’s an independent body that examines the nominations. I guess it really is independent. I’m very proud to have been chosen.
RK: When you look back at your ordeal in Niger and Mali, do you think you could have survived, mentally and physically, without the companionship of Louis Guay?

RF: I’ll never know the answer to that question, but there is absolutely no doubt that it would have been enormously more difficult, and it was difficult enough as it was. So, I think Louis and I were extremely important to each other. Certainly he was hugely important to me. In the book, I mention that we were separated for three days during an interrogation phase, and that was among the more difficult periods simply because we were separated and couldn’t rely on each other, or talk with each other. 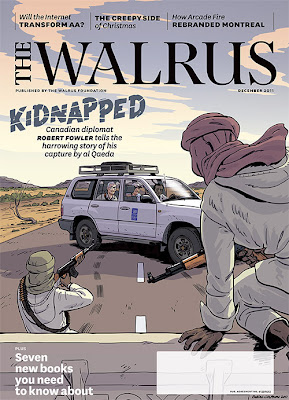 RK: On the other hand, how has it shaped your general perception of the religion of Islam, and specifically its fundamental factions?
RF: This whole story is about Islam, or rather about a very particular corner of Islam. My captors would say repeatedly that 72 out of 73 Islamic sects are wrong, and that they were the only ones that were right. I’ve had something to do with Christian and Jewish fundamentalists and what I was hearing from these guys was quite similar to both of them. Basically, they weren’t interested in debating religion because they knew with absolute certainty that they were right. They were not anxious to debate points but anxious that we accept their version. So yes, was it interesting to me as a geo-strategic analyst to see militant Islam upclose? It was fascinating. I thought it might also kill me though.
RK: Has the whole experience added a sense of paranoia to your everyday life? I’d imagine in Ottawa it is less likely, but what about when you travel abroad?
RF: The big issue is would I return to Africa? The short answer is that precisely a year ago I did return to Africa and there were some diffcult moments frankly. Not in the very pleasant Western-style hotel I was staying in, but when I walked through the streets and travelled through the back country and the car I was in was suddenly forced to stop much of it came back, and it was unpleasant. But, am I generally paranoid about such things re-occuring where I am? No, I’m not.
RK: I was going to ask if you had been back to Africa. Where did you travel to a year ago when this happened?
RF: I was in Senegal not very far from Dakar. I was staying there and ranging about 100 km’s around Dakar.
RK: You’ve had such a storied history with the continent of Africa. Did the kidnapping change your perception of the continent in any ways?
RF: No, it has not. Look, there are nasty people everywhere, and Africa has no monopoly on that. My affection, and engagement with that continent and those billion people, remains exactly as it was.
RK: Do you often daydream back into that desert?
RF: I do, and it occurs in the strangest circumstances and times. It might be a calendar event. The time of year we are at presently, particularly Christmas and New Year’s Eve, were traumatic moments based on what was going on during my capture on those days. I could not go through Christmas or New Year’s without remembering quite a lot about what it was like out in the desert during those times. Obviously, the 21st of April is an important date, that was the date we were told we were free. April 11th is important, that the day we were told we would be free.
There are also just thoughts that suddenly come out of nowhere, and my reaction is either, “God, did it really happen?” It’s such a radically different experience than my day-to-day life these days that you kind of almost have to slap yourself in the face. There will also be moments of just straight, “My God, I’m lucky to be alive because it was such a close thing.”
RK: When you look back on all you’ve learned and gained from the experience, would you change that happening to you if you could? Or, do you think you’re better off because of it?
RF: I have to separate those questions if I can. I would not wish that experience on anyone, even myself. In other words, there’s no part of me that could say I’m happy I had that experience. It was just simply too traumatic to be therapeutic. That said, I say in the book that I think I probably live life more fully these days than I would have if I had not had that experience. Does that make the experience worth having? I don’t think so.
I am no doubt, to the dismay of many people, sometimes including my family, more outspoken than most people. I’m sure a number of people find that pretty tiresome.

RK: Speaking of your outspoken nature, you’ve been vocal recently about a lot of things. First, I’m wondering what your assessment is of Al-Qaeda’s threat today? With Bin Laden gone, do you believe they are still powerful?